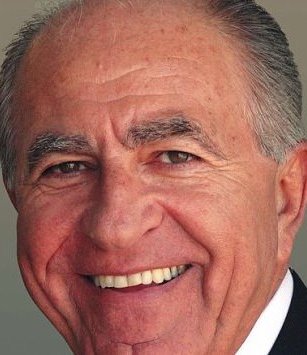 President of the Hellenic American Union of Athens – P.A.D.A. Member

Chris Spirou is a politician in New Hampshire in the United States of America (U.S.A.). He was born in the town of Porti, Karditsa, Greece, and migrated in 1956, at the age of 13, to the United States of America. He attended the Saint Anselm College, Goffstown, New Hampshire, and holds a master's degree in urban studies and social change from the short-lived Goddard-Cambridge Graduate Program in Social Change, the records of which are maintained by Goddard College, Vermont.
He has been a guest lecturer in many universities including Harvard University and Dartmouth College and taught a courses as an adjunct professor at New Hampshire College (now Southern New Hampshire University). In 1970 he was elected to the New Hampshire House of Representatives. He served as House Minority Leader from 1975 to 1984 and was the Democratic nominee for governor in 1984, but was defeated by John Sununu; he later served as chair of the State Democratic Party, but returned to Greece in 1993.
In 1994, he was elected as a President of the board of the Hellenic American Union (HAU), an Athens-based non-profit association founded in 1957 to promote U.S.-Greek educational and cultural ties, including through English teaching and testing. Income from HAU's testing program funded the creation of the Hellenic American University through an act of the New Hampshire state legislature in 2004, with Spirou being the first President. He served the university board and resigned from the presidency position in 2012. While in Athens, Spirou established friendly ties with Slobodan Milošević, the president of Serbia, who invited him to be a member of the Serbian delegation to the Dayton peace talks in 1995. Other political initiatives include the foundation of the Pan-Orthodox Congregation of Hagia Sophia, Inc., with the aim of reconverting Hagia Sophia in Istanbul into an Orthodox church, and public opposition to the 2018 Prespa agreement between Greece and the recently named, North Macedonia.